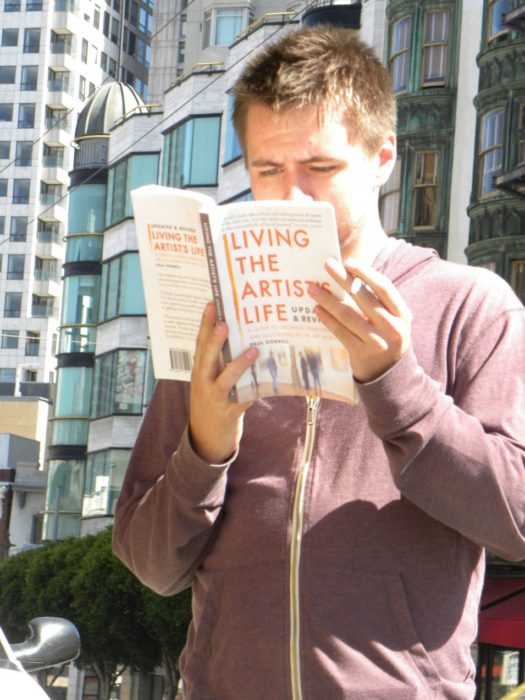 Paul first wrote Living the Artists Life, his guidebook for artists, in 2005, updating it in 2013. It’s carried by a variety of universities and bookstores, and has received fantastic reviews across the country. While on tour, Paul spoke at the Rhode Island School of Design, the Art Students League of New York, the San Francisco Art Institute, and dozens of other renowned institutions. Take a look. You might find it worthwhile.

Why on Earth Did You Choose this Profession?

You didn’t, it chose you.  Or you were born to it.  Or it’s something leftover from a past life that you’ve yet to satisfy.  Or maybe you don’t buy any of that and it’s simply what you want to do.  Either way it’s all good and sometimes bad, but mainly good if you want it to be.

The journey is long and the rewards many, it’s just that they rarely come as soon as we want or in the way that we first envision—like many things in life.

Most artists think their work will be ready to show to the galleries long before it actually is—just like writers and publishing.  You may believe this too.  Good.  In a sense you must.  That will help sustain you while you go about the process of getting ready.  And the ego that sometimes made you ashamed when you were younger, for perhaps being too cocky or arrogant—don’t toss it away just yet.  You may need it to help bear you through the privations, rejections and periods of self-doubt you’re bound to go through.  But I do feel it’s wise to tame the ego.  Let it serve you, not you it.  Eventually your work will speak for itself anyway, and your ego will have nothing left to prove.  And if you never went through that in the first place, congratulations—you’re rare.

Your journey toward master status may be brief or long, depending on the level of your talent and how the breaks fall.  If it proves to be long, don’t worry—the greater the struggle, the greater the rewards, as long as you don’t give up.  Learning patience is an ancient and priceless virtue.  I’ve certainly had to learn it whether I liked it or not—and many times I didn’t.  So have the vast majority of artists that I’ve worked with.

So, why did you choose this profession?  In all likelihood you didn’t.  Like me, you were born to pursue it with all due vigor, damning the torpedoes as you left shore.  Cool.  I applaud your courage.  Now, did you remember to bring a life preserver?  You may need one before the voyage is over.  At least I have, more than once.

An artist can be either.  There is no written rule that says you have to be radically dressed, tattooed and pierced to dwell in the arts.  All you have to be is open-minded.  If you can’t be that, at least be bloody good at what you do.  Chances are though, if you were born an artist you were also born a nonconformist.  This is something you won’t be able to help and shouldn’t want to.  In fact you should be proud of it.

Grandma Moses, in her quiet way, was a nonconformist.  So was Whistler—God rest his turbulent soul.  So were Martin Luther King, Jr., Henry Miller and Simone du Beauvoir.  Nonconformists play an important role in our world, forcing conformist society—which also has its place—to question itself, its direction, and purpose.  Nonconformists succeeded at this during the McCarthy era, the Civil Rights era, the Vietnam War, and gradually during the escalation of the Iraq War.  Conformist society always attacks nonconformists for this, resisting humane change until finally, when outnumbered by voices of reason, they’re forced to acquiesce.

Personally I feel obligated to question society, although that has a tendency to cast me beyond the pale.  Fine.  The artist normally lives beyond the pale, and is often something of an outcast anyway.  At first this may anger you.  But later you may see the need for it and the anger will slip away.  Let it, although there’s nothing wrong with letting it slip back in now and then.  Good work can come from that emotion if taken in doses, but self-destruction is more likely if it isn’t accompanied by self-control.

Where does this nebulous, hard-to-explain, harder-to-define quality come from, and what is it that, well, drives it?  I haven’t a clue.  Is it essential to what you do?  You bet.  How will you know if you have it?  Because of the way it rides you, rarely letting you rest, never letting you forget your calling.  Drive is merciless, ceaseless, and in the worst cases heedless.  I ought to know.  I’ve been guilty of all that.

My own drive is never-ending.  If I don’t write, I don’t feel fully alive.  I feel as though I’m skipping out on an ancient and time-honored responsibility, regardless of whether I feel equal to the task or not.  I also begin to feel like my emotions will explode.  Does that make it any easier to face the blank page each day?  It hasn’t yet.  Does it give me confidence, even when a day of hard writing may not?  Almost always.

Do you need to feel that same drive in order to create?  On some level, yes—that is if you want to mature as an artist.  Your drive can be mild, impassioned, or insane.  But you should feel it in some measure; it’s partly where your inspiration comes from.

What if you feel no drive, but simply enjoy working in whatever medium calls to you?  Great.  You’re free of a terrific burden, which will allow you to just take pleasure in your art.  After all, it’s not required that you be a tortured maniac in order to create.  But if you’re trying to reach the higher levels of your discipline, being tortured, as well as something of a maniac, can be a handy thing—if you know how to take it.  How do you take it?  Like most things, by making mistakes then learning from them.  I’ve made plenty.  Does that mean I’ve learned a great deal?  That depends on who you ask.

Contrary to a commonly held notion, we do not suffer more than other people.  There is so much unspeakable suffering in the world—especially from poverty, war, and disease—that many of us in the industrialized nations don’t even know the meaning of true suffering, including me.  I’m not saying that artists don’t have it tough, I’m just trying to put things in perspective.

But even if we don’t suffer more than others, we do tend to feel things more deeply.  This, combined with our acute sensitivities, intensifies the suffering.  Couple that with the usual insecurities, spells of depression, and years of rejection, and baby you’ve got one suffering artist.  Or to quote good old Scott Fitzgerald: “…There are open wounds, shrunk sometimes to the size of a pinprick, but wounds still.  The marks of suffering are more comparable to the loss of a finger, or of the sight of an eye…”

He wasn’t lying either, since that dude suffered greatly—not necessarily because of what he went through, but because of how he took it.  His wife Zelda too, although some claim that by the time she died, in that fire in the asylum in Ashville, she didn’t feel those things anymore.  Maybe not, but I’d hate to be the one to speculate on the nature of her emotional state when the flames finally reached her.

Will you suffer?  As surely as you eat, drink and breathe.  Will your work benefit from it?  If you choose for it to.  Is this a necessary condition of being an artist?  I don’t know about necessary, but I do know it’s common.

All right, so we suffer.  But by God, we know how to live too.  And by we I don’t mean just artists, but anyone who lives through the power of their creative drive.  Few people are given the gift to live this way, few are able to feel so alive between the spells of suffering.  That suffering is simply a part of the price you pay for your talent, and since you have to pay it anyway, you may as well pay willingly.  The alternative is to live an unenlightened existence, and in the end no one really wants to do that.